What makes someone a good person? What makes them bad? Researchers have come upon a wealth of answers to the second question: people are more likely to engage in bad or harmful behavior if they have been victims of violence and abuse, marginalization, oppression, and unjust systems like authoritarianism, to name a few possible causes.

When it comes to why people become good or heroic, however, there isn’t a clear answer. Some believe that heroes feel more compassion or empathy; others believe in a “hero gene”; still others in a link to levels of oxytocin, like neuroeconomist Paul Zak, who says that the presence of the so-called “love hormone” in the brain increases the probability of becoming altruistic and grateful.

We really don’t know. Experts who study and research the conditions that make people bring out their inner hero have found evidence to back up these possible leads. But they have yet to determine what inspires certain people to contribute their time, energy, and money to improve the lives of others, especially without expecting anything in return and, sometimes, at the cost of their own well-being.

The French philosopher Auguste Comte coined the term “altruism” in the 19th century to describe a theory of conduct centered on the act of helping others. The study of altruism is currently one of the most popular research areas within the biological and social sciences, so it’s no surprise that finding out what causes someone to develop this trait remains one of the field’s momentous questions.

Why Do People Help Each Other?

Altruism is defined as a disinterested concern for another person. It means doing things simply for the sake of helping, not because we feel obliged to do them or because our religion dictates it.

Sharing your meal with someone, helping out a neighbor who isn’t feeling well, giving money to a homeless person: daily life is full of small acts of altruism. Its effects on the lives of people can be so overwhelmingly positive that psychologists are driven to understand what drives the impulse to be kind. 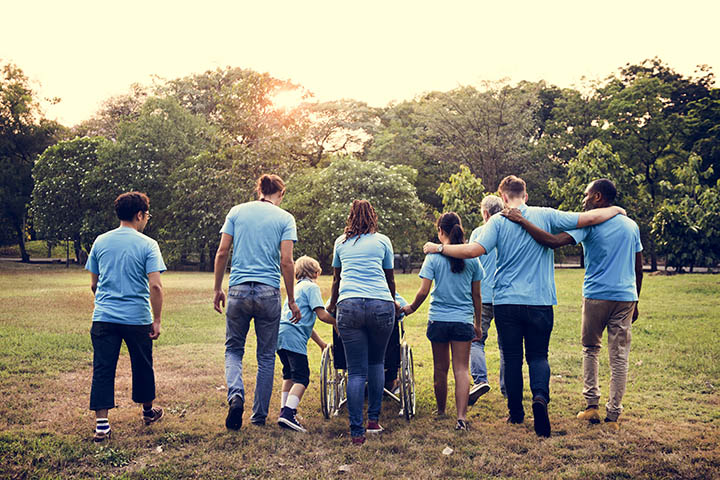 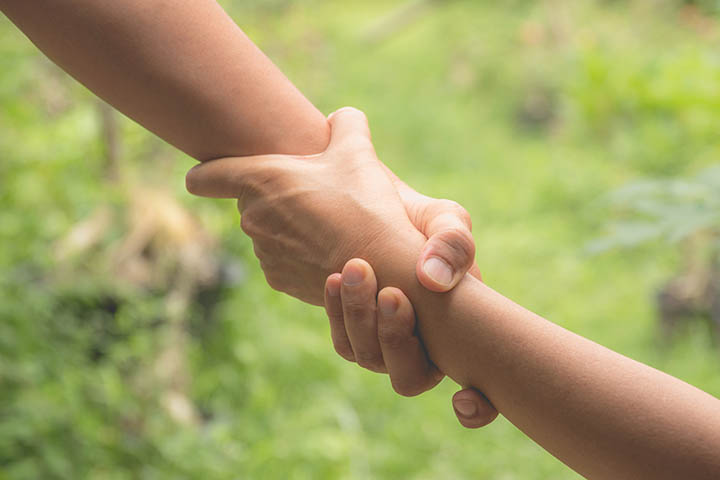 What inspires these acts of goodwill? What motivates someone to risk his or her own life in order to save a complete stranger? And is the tendency to help others a basic characteristic of human nature?

Scientists have found different ways to explain the existence of altruism. Their theories and reasonings range from brain science to social norms. Here are some of them:

A study published in the journal Social Cognitive and Affective Neuroscience in 2014 showed that being compassionate and good activates areas of the brain associated with the reward system. The positive feelings produced by compassionate acts reinforce altruistic behavior. Generating compassion in turn strengthens positive feelings. We can empathize with the plight of others without ignoring the presence of suffering and the role we can play in helping to change their negative reality.

Biological reasons: Evolutionary scientists sustain that altruism has deep roots in human nature, because it promotes the survival of our species. In fact, Darwin himself argued that altruism, which he referred to as “sympathy” or “benevolence,” is “an essential part of the social instincts.” Darwin’s statement is supported by the recent studies in neuroscience we previously mentioned, which have shown that behaving generously towards others activates the centers of the brain that deal with pleasure and reward, much like chocolate or sex.

Environmental reasons. Psychologists have long debated whether some individuals are born with a natural tendency to help people, while others are not, a theory that suggests that being altruistic could largely be a question of genetics.

Several studies have challenged this theory. They discovered that socializing has a significant impact on the altruistic acts of infants aged 1 and 2, demonstrating that children who watch others perform simple reciprocal acts of altruism have much higher chances of becoming kind. The investigation suggests that role modeling generous acts can be an important way of cultivating compassion in children. 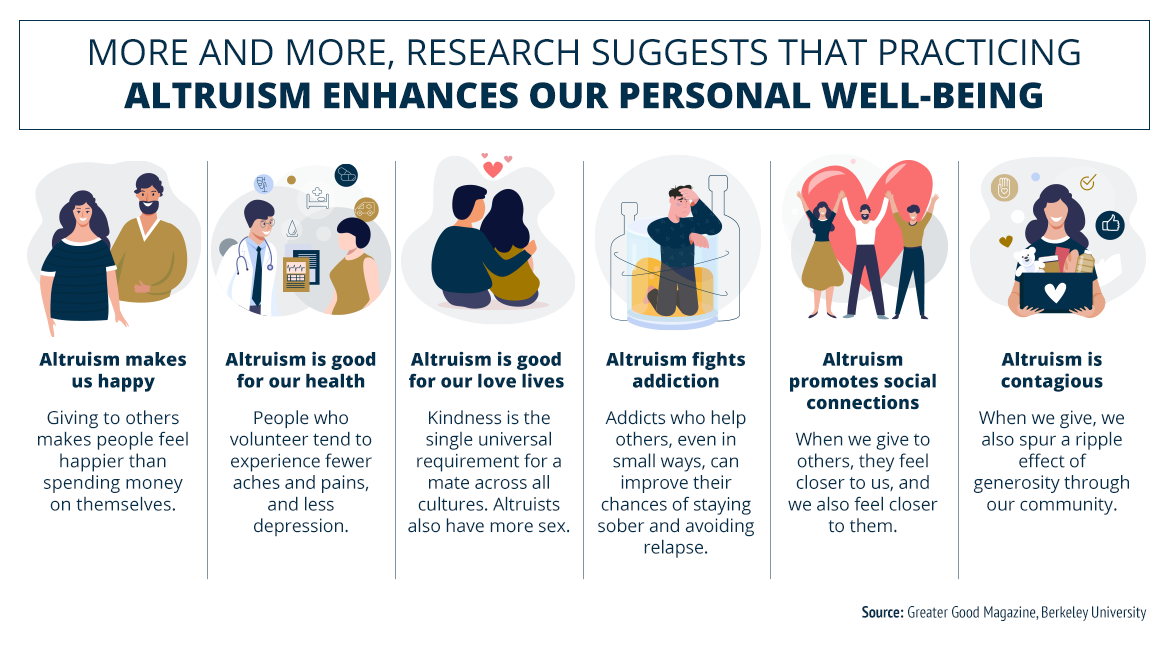 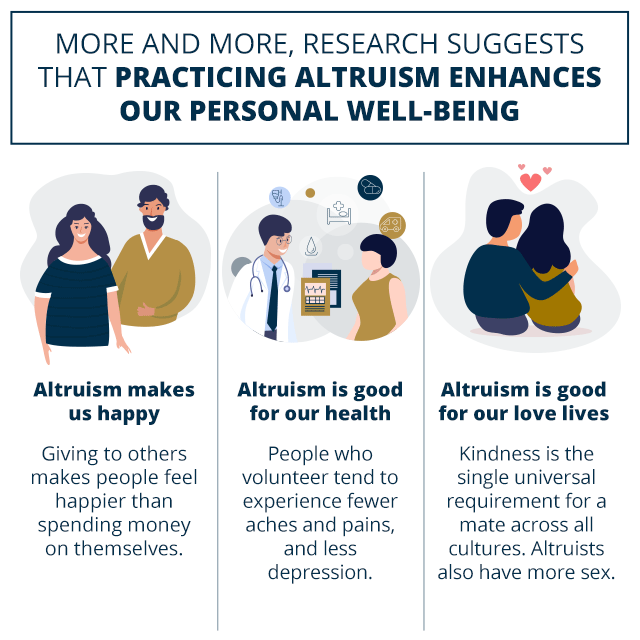 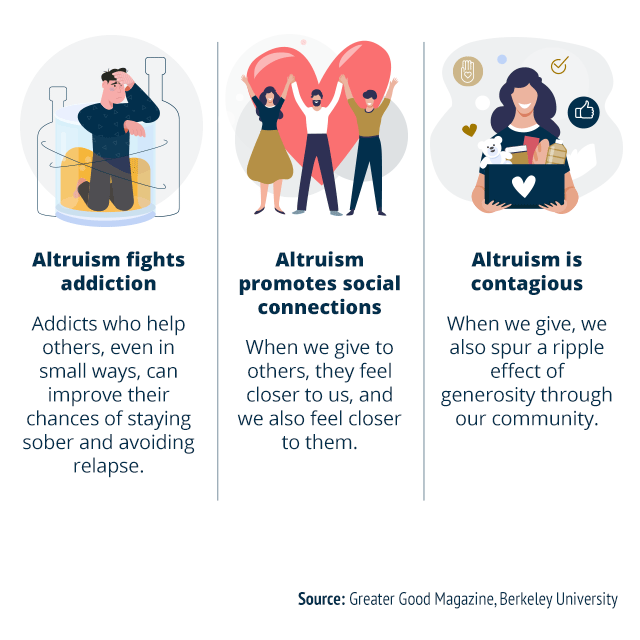 Social norms. Societal rules and expectations can also influence altruistic behavior. Reciprocity, for example, is a social norm that makes people feel inclined to return the favor when someone does something good for them. For example, if a friend lends you money, you might do the same if they are ever in need.

Cognitive factors. Even though the definition of altruism implies helping others without expecting anything in return, hidden cognitive incentives could have a role to play as well. For example, helping others could appease and relieve our own anxiety. Being generous to people contributes to seeing ourselves as empathetic and kind individuals.

Researchers suggest that people have a higher chance of engaging in altruistic behavior when they feel empathy for the person who is suffering. Studies have found that children tend to become more altruistic as their sense of empathy develops.

Beyond the theories discussed here, the reasons and motivations for altruism will remain an important object of study for social psychology. Researchers will continue to ask themselves whether we help others for truly selfless reasons or because there are hidden benefits for our own well-being that guide and motivate altruistic acts.

So far, the evidence suggests that humans have deeply rooted tendencies towards both behaviors. The challenge is finding ways to express the most positive feelings and impulses of our human nature, and cultivating them in our children. Because the world would be a less compassionate place without altruism.