Much More Than Just Baby Blues

Much More Than Just Baby Blues

There are some fears that will never change with the arrival of a baby—no matter your methods, psychology or even the apps that tell you when to change a diaper or breastfeed.  Fear of labor, sadness and irritability so debilitating that you can’t enjoy the presence of your new baby all seem to be part of the process of being a mother, just like pushing.  Postpartum depression or “baby blues” is a temporary period of sadness that affects 1 in 7 women, according to the American Psychological Association.

It can have many causes: hormone imbalances, lack of sleep, the fact that you’re experiencing a major life change, or being overwhelmed by everything being a mother means. Even lack of sunlight can have an impact on your mood.

Doctors say that it’s normal for new mothers to experience anxiety, irritation, sadness or unexplained crying. Even women who are not diagnosed with depression experience equally disturbing thoughts, images and fantasies.

Postpartum depression can be much more serious than just baby blues.  When these feelings persist for two weeks after birth or start one month or more after the delivery or C-section, the depression can become so serious that the mother can have suicidal thoughts or even think about harming the baby. But most of these mothers do not receive treatment. 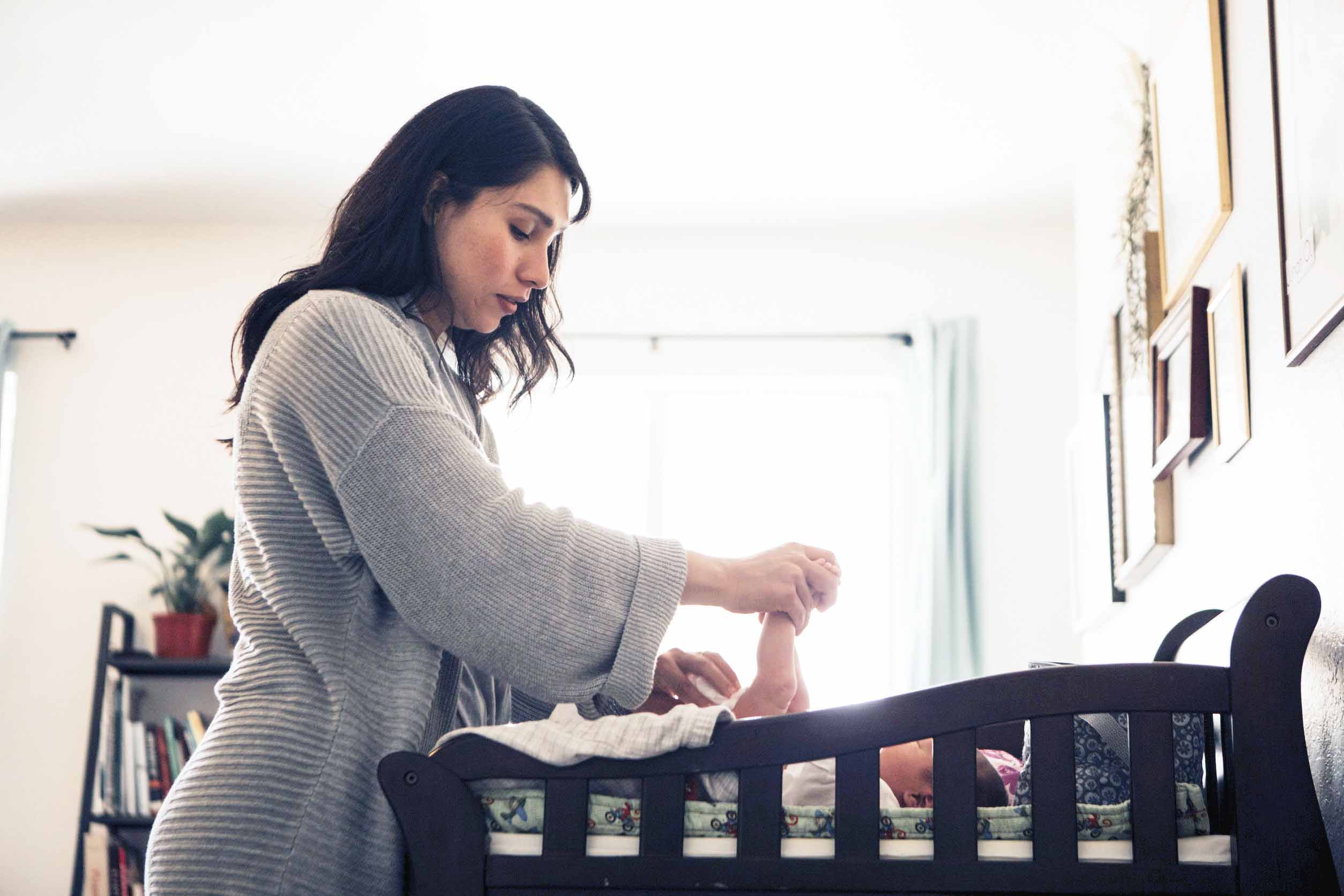 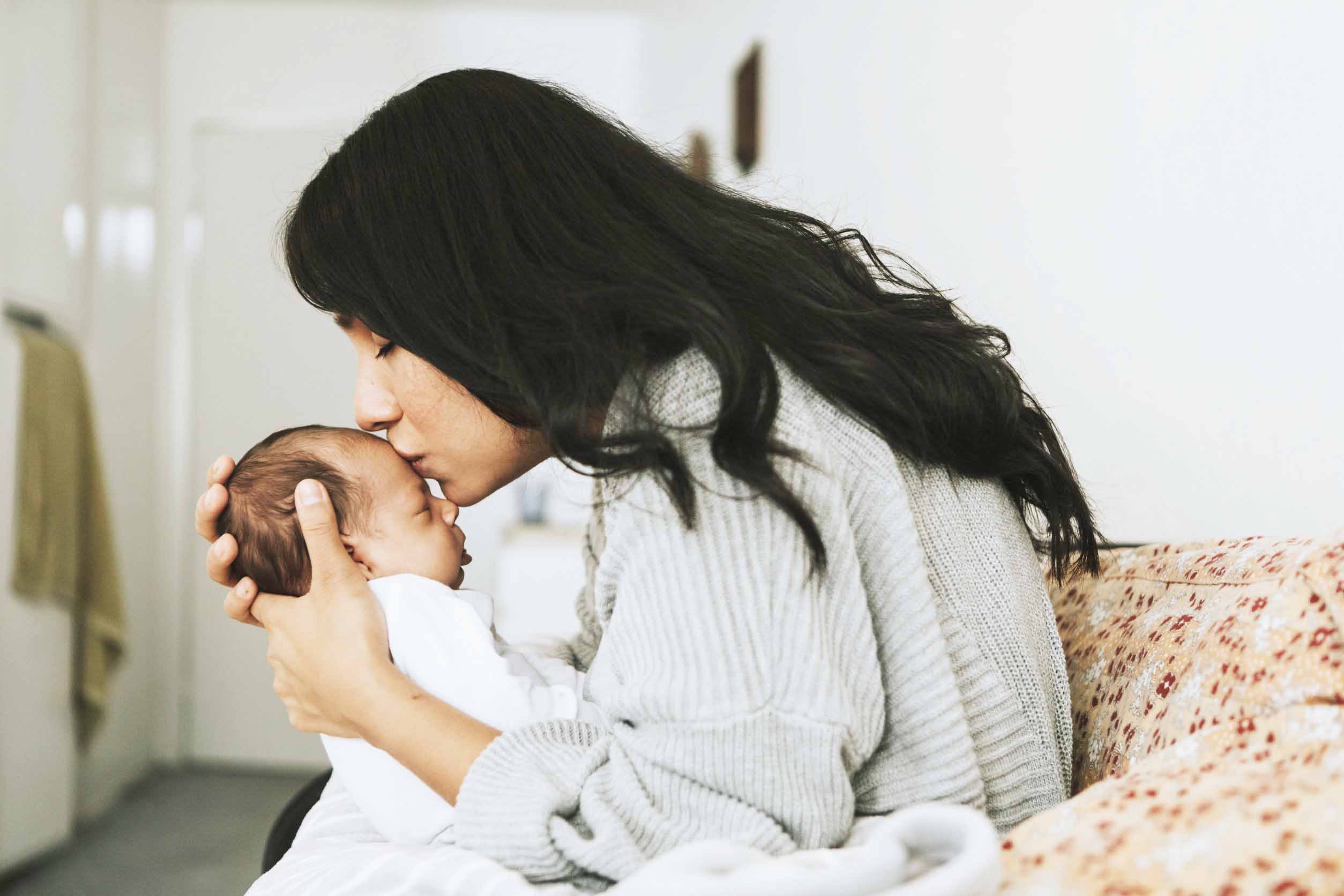 In addition to experiencing feelings of extreme sadness, anxiety and exhaustion, women with postpartum depression might even reach a point where they’re not capable of taking care of the baby or themselves.

Even though these feelings are common in new parents, mothers rarely feel comfortable enough to discuss them. They suffer in silence, hoping it will pass, full of guilt for not being a better mother.

Fathers want to be part of the newborn experience, but often feel like outsiders. Mothers might not always realize that they’re excluding them from the baby’s care, and that fathers also want to spend time with their little one.

Data has shown that up to 1 in 10 men deal with this condition when their baby is born. It is generally associated with first-time fatherhood.

According to researchers, new dads can also experience hormone changes that can affect their moods. Some of the symptoms can be similar, such as extreme tiredness and changes in diet or sleep habits.

Men with postpartum depression need their family’s support and in some cases may require professional treatment. Encouraging fathers to be involved with the baby and for the couple to spend time together is one way to improve their mood.

Scientists are using special techniques to examine the brain after birth. Their findings have focused on physiological and evolutionary explanations for why so many mothers are prone to intrusive thoughts, and why this normal level of postpartum anxiety can turn into a serious condition.

These new studies on the biology of postpartum depression hope to help eliminate part of the stigma and silence that surrounds this disorder.

During pregnancy, a woman’s body goes through countless transformations, but we still don’t know enough about the changes going on in the future mother’s brain.

A study based on research by Spanish scientists that was published by the journal Nature Neuroscience showed that pregnancy can cause long-term changes—up to at least two years after birth—in the morphology of mothers’ brains. These brain changes prepare women to receive and care for their child.

Researchers at Yale University recently completed an innovative study on new mothers and fathers. They used functional magnetic resonance imaging (fMRI), a technique that tracks blood flow and patterns related to brain activity, to see which neural circuits were activated when healthy parents saw and heard their babies.

The Importance of Sunlight

To delve deeper into the causes of postpartum depression, a team of researchers at the University of California San Francisco reviewed data from 293 first-time mothers, with a 30% general risk of depression.  Some of the aspects they analyzed were the amount of daylight they received during their last trimester of pregnancy, history of depression, age and how many hours they slept each day.

They found that the amount of hours of sunlight they were exposed to during the last month of pregnancy and just after birth greatly affected their chance of developing symptoms. The risk of depression was much lower in women whose last trimester coincided with more hours of sunlight.

Less exposure to sunlight was not only associated with severity of depressive symptoms: these symptoms became more severe after the birth of their babies.

In some cases, lack of sunlight can occur for natural reasons: for example, if women live in countries in the northern hemisphere and the end of pregnancy coincides with periods with shorter days. Whatever the reason, researchers found that exposure to sunlight during the third trimester could minimize the symptoms of depression, even in the first three months of the baby’s life.

Medication: Yes or No?

It’s not clear whether antidepressants can effectively prevent postpartum depression, and little is known about the possible side effects for both mother and baby, especially during breastfeeding. More extensive studies are needed that include comparisons of antidepressants with other prophylactic treatments (e.g., psychotherapy) and examine the side effects for the fetus or baby.

This drug, called Zulresso, will only be administered through a restricted program in authorized medical centers as an IV infusion over 60 hours. The mother needs to be in a secure environment and monitored by a doctor because the drug can cause “excessive sedation and loss of consciousness.”

The FDA explained that the drug has been proven to be effective in two clinical trials that divided mothers into two groups: one that took the drug and one that only took a placebo (a drug-free substance).  The trials found that a little of the drug could pass to the baby if the mother was breastfeeding, but experts say that “it is not significant or harmful for the baby.”

Improving treatments for mothers will have direct implications for babies and children. Research has consistently shown that the children of mothers with chronic depression experience more emotional and cognitive difficulties as they grow up. But the prospects of these children leading happy and healthy lives will be greater if their mothers receive compassion and treatment.